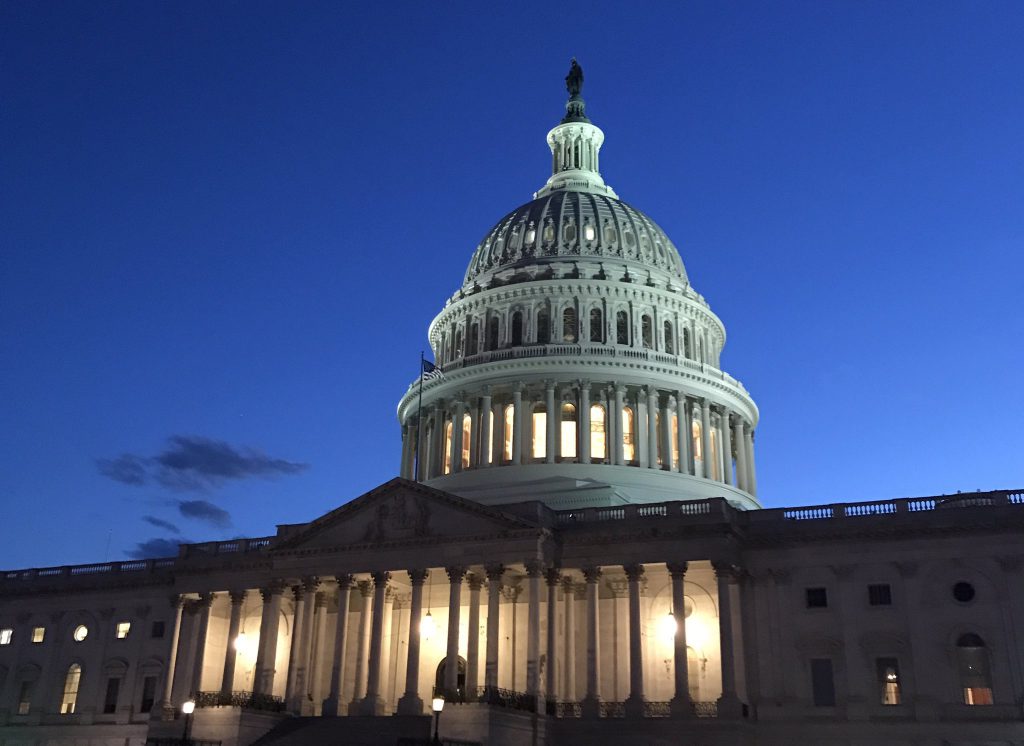 For the last six years, the Puget Sound Partnership and the Northwest Indian Fisheries Commission have held an event that draws attendees from around the Puget Sound region and across the state: Puget Sound Day on the Hill.

Puget Sound Day on the Hill raises awareness about the need for sustained federal investment in Puget Sound restoration and salmon recovery. Representatives from tribes, state agencies, local governments, nonprofits, and businesses, along with concerned residents, lend their voices in support of action to save Puget Sound and uphold tribal treaty rights. The event provides a venue for diverse groups to meet with the members of the Washington congressional delegation, express thanks for the delegation’s support of recovery goals, and discuss the importance of Puget Sound restoration and salmon recovery.

While online meetings might not offer the same level of connection as in-person meetings, the virtual version of Puget Sound Day on the Hill allows more people to participate. “Seeing dozens of new names in the participant list means we’re reaching new people,” said Laura Blackmore, executive director of the Puget Sound Partnership. “We’re getting more people involved and helping the delegation connect to even more constituents.”

Justin Parker, executive director of the Northwest Indian Fisheries Commission, discussed what he saw as one of the essential aspects of Puget Sound Day on the Hill, regardless of the form it takes. “Pulling a diverse group of people together and working on common goals where mutual interests lie—to be able to move the dial with our efforts—that’s important.”

The growth of Puget Sound Day on the Hill

Sheida Sahandy, former executive director of the Partnership, explained that the inspiration for Puget Sound Day on the Hill arose from a need to better communicate the Partnership’s vision for a healthy Puget Sound. During a conversation in 2014 with former Representative Heck in Washington, D.C., Sahandy realized that, to fully engage with federal partners, she had to clearly articulate the problems the Partnership was trying to solve. “I explained to Congressman Heck that the fundamental problem was that we were degrading the system faster than healing it,” she said. “On this course, we were going to end up where we were headed, and where we were headed was not where any of us wanted to be.”

In 2015, Sahandy organized the first Puget Sound Day on the Hill with a small group of partners and made the trip to Washington, D.C. to advocate for federal investment in Puget Sound restoration and salmon recovery. The event has grown every year since—and not only in terms of attendance, but also in terms of what it has accomplished.

Parker explained that the event has not only helped the coalition hold the line during tough budget times, when the Pacific Coastal Salmon Recovery Fund and the Puget Sound Geographic Program were proposed to be eliminated, but also helped build support for more funding.

“For our tribes, what’s first and foremost is their treaty rights,” Parker said. “We’re going to continue to push the envelope when it comes to salmon recovery efforts, when it comes to water quality, water quantity, all the different environmental impacts that we’re dealing with that have an effect on our watersheds and on species. From a tribal perspective, it’s about providing opportunities, and providing food for our people and our communities.”

The attendees of Puget Sound Day on the Hill have helped advocate for the PUGET SOS (Promoting United Government Efforts to Save Our Sound) Act, which was introduced in February by Representative Kilmer and Representative Marilyn Strickland. The PUGET SOS Act establishes a Puget Sound Recovery National Program Office at the U.S. Environmental Protection Agency, codifies the Puget Sound Federal Leadership Task Force, and authorizes $50 million annually for five years for Puget Sound recovery and restoration. The PUGET SOS Act recently passed out of the House Committee on Transportation and Infrastructure.

Both Parker and Blackmore emphasized that, while the funding is vital, Puget Sound Day on the Hill also produces other benefits that are equally crucial. Other participants agree.

“Every year, as we spread the word about our work and advocacy, our coalition grows,” said Sharlett Mena, special assistant to the director at the Washington State Department of Ecology and a member of the Puget Sound Day on the Hill steering committee. “We have raised awareness about the Sound as an environmental treasure and economic boon to our region with members of Congress and the administration.”

Geoff Potter, the deputy director of Governor Inslee’s Washington D.C. office and a member of the Puget Sound Day on the Hill steering committee, likewise remarked on the strength of the coalition. “It is not every issue where you have such an expansive coalition of interested parties,” he said. “Puget Sound Day on the Hill provides a nexus to not just demonstrate the breadth and depth of that coalition in a very real way, but also by its very presence to help keep people engaged. That’s what’s led to results.”

What makes Puget Sound Day on the Hill special

Puget Sound Day on the Hill draws a big group of attendees every year, and many of the folks who attend once often return in the following years. While the panels, discussions, and guests change from year to year, the event has some constant elements that make it a perennial draw.

“I’ve had a number of aha moments at Puget Sound Day on the Hill,” said Kate Dean, Jefferson County Commissioner. “There’s something profound about that dedicated time. And having in-depth conversations can really further your thinking and understanding.”

Dean also mentioned that Puget Sound Day on the Hill is a good example of participatory democracy, where people have the chance to discuss policy with members of Congress and federal officials.

“Not everybody is as familiar with federal advocacy, so Puget Sound Day on the Hill is a great opportunity for folks who are looking to learn more,” said Robb Krehbiel, Northwest representative for Defenders of Wildlife. “It’s not only about convincing our congressional delegation to do the right thing, since a lot of them have been doing the right thing. We need to make sure they have the tools to advocate, that they understand the urgency and gravity of the situation.”

Diane Buckshnis, Edmonds City Council member, echoed Krehbiel’s remarks about learning the ins and outs of the federal appropriations process. “[The event] is a great way to understand the complexity and enormity of the issue we have surrounding our climate,” she said. “It’s also educational for understanding the opinions of our elected officials and how our federal government works.”

Attendees from years past have often mentioned how much they enjoy being able to speak with members of the recovery community they might not encounter otherwise. “The opportunity to network with partners from around the region has a lot of value,” Dean said. “It’s about taking time out from our busy day-to-day to connect with each other and with policy makers.”

The future of Puget Sound Day on the Hill

Besides the prospect of returning to in-person events for Puget Sound Day on the Hill in the future, members of the steering committee also look forward to seeing the event evolve over the next few years.

One of the goals of the steering committee is to seek the involvement of more people from underrepresented communities. “I’d like to diversify our attendee list,” Blackmore said. “We have strong and invaluable participation from the tribes, but not many representatives from other communities of color. We would like to change that.”

Like some other estuaries of national importance, Puget Sound lies within the boundaries of one state, though the health of the Sound affects economic, environmental, and human wellbeing throughout the Pacific Northwest, the Inland Northwest, and British Columbia. Blackmore, Parker, and others mentioned that they’d like to connect Puget Sound Day on the Hill with events relating to other water bodies of national significance, like the Great Lakes or Chesapeake Bay, as a way to emphasize the importance of healthy waterways to Congress and the Biden administration.

The power of the collective

Over the course of the last six years, which includes adapting last year’s event to a virtual format, the people involved with Puget Sound Day on the Hill have shown a willingness to go the extra mile for Puget Sound restoration and salmon recovery. The dedication shown by the organizers, participants, and sponsors is part of what makes the event notable.

“At the end of the day, everybody cares,” Parker said. “Everybody has the best interests here. People care about the issues, and they care about our natural resources.”

Blackmore made a point to highlight the people who make Puget Sound Day on the Hill a success. “I am deeply grateful to our partners who dedicate their time and energy to the event,” she said. “The Northwest Indian Fisheries Commission, the Governor’s Office, The Nature Conservancy, and our state agency partners help plan the event every year. I’m also grateful to our sponsors, who in years past have enabled us to provide refreshments and other amenities. However, the event wouldn’t work without the folks who show up. This event is truly about the power of the collective.”

This year’s Puget Sound Days on the Hill will be a five-week series of free virtual events featuring members of the Washington congressional delegation, panelists from federal agencies, and special guests. The series will run for five Fridays from April through May, starting April 23. Each session will be held from 1:00 to 2:30 p.m. Pacific time.

Learn more about Puget Sound Day on the Hill at the event’s official site and register now for the sessions in April and May.